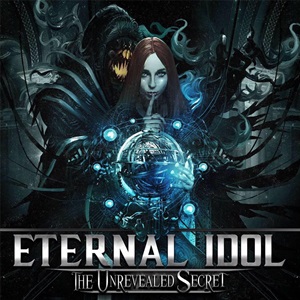 Besides being one of the unsung Tony Martin-fronted Black Sabbath albums, this incarnation called Eternal Idol contains ex-Rhapsody of Fire / current Angra vocalist Fabio Lione among others. This new Italian band features co-female lead vocals and a style for the quintet that wavers between symphonic metal and heavier modern rock on this debut album The Unrevealed Secret. Grabbing three members of Hollow Haze (a band Fabio worked with on their Countdown to Revenge album) in the aforementioned Giorgia Colleluori on vocals, Nick Savio for guitar/keyboards and Camillo Colleluori on drums – Secret Sphere’s Andrea Buratto rounds out the lineup for bass, ensuring quality abound from the performance end on all fronts, making these 12 songs quite intoxicating and addictive right out of the gate.

Overall, much of the material fits in a familiar melodic, symphonic power metal comfort zone for these performers – accentuating the lush orchestral touches yet never allowing the bombast to overtake the aural activities. Giorgia and Fabio share the spotlight vocally, both solid metal singers that add the right upper register proclivities and emotional mid-range versatility, as “Feels Like I’m Dying” and the Kamelot-ish “Another Night Comes” illustrate. Pushing a lot of arena rock musical hooks for guitar and keyboards allows the duo to expand harmonic possibilities during the verses and chorus of “Awake in Orion” – setting up a scenario where you could be thinking Savatage meets Nightwish in a great wrestling match. The Unrevealed Secret successfully captivates from cut to cut because of its emphasis on smart songwriting ethics – keeping the catchy aspects on high alert, be it the steady Savio guitar lick for the verses of “Is the Answer Far from God?” or the swirling keyboard/ cyber-oriented drum tempo combination for “Stormy Days”.

Everyone is aware of the overcrowded metal marketplace these days – so much so that newcomers often get the shaft over veteran bands. Hopefully this will not be the case for Eternal Idol, as this is exemplary symphonic power metal that holds the reigns on bombast and speedy, fluffy fare to a bare minimum because of its keen, modern rock-like nuances.