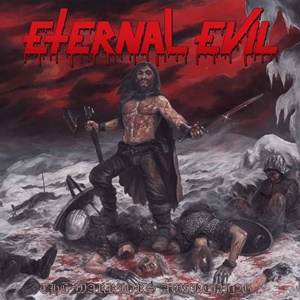 There’s something to be said for teenage angst, rebellion, and the need for self-expression. Especially relevant in heavier genres of metal – where you can hear a purity and singular vision for destruction captured for primal posterity. Such is the case for Swedish thrash quartet Eternal Evil as the members range in age from seventeen to nineteen. Together since 2019 they’ve issued a demo and single in short order prior to signing with Redefining Darkness Records for their debut record The Warriors Awakening Brings the Unholy Slaughter. Ready to tear the cover off anything that dares stand in its path, the music and vocals entail a vicious power and evil atmosphere that rivals the early pioneers climbing out of the underground.

Between a blitzkrieg barrage of buzzsaw twin guitars, relentless low end bass action, and the frantic snare/kick hits as well as fleet transitions with tom rolls in abundance, it’s very obvious these gentlemen subscribe to many influences from the early Teutonic and American brigade. Even when the band choose to be a little more controlled and groovy during the instrumental section of “Terror of the Sphinx”, the lead aspects take on a frantic, slightly out of control mannerism with whammy bar bends amidst the melodic twists. Guitarist Adrian also doubles as the vocalist, rolling with the stop/start speed tremolo picking as a trooper for “The Captors Command” and Sodom-oriented “Rise of Death” as if possessed from the underworld, taking on a mixture of Mille-like shrieks and early Whiplash-like lower bellows at the same breakneck pace often as the riff/tempo speeds. When the band chooses to get a little more long winded with the arrangements, the musicianship takes on more of an adventurous scope – “Minotaur of Evil” at 5:44 a great example featuring almost two minutes of music before the vocals kick in, the mid-section taking on some “Angel of Death”/Slayer-esque movements. Owners of the CD also get a bonus track “Stab of the Blade” that originally appeared on their limited Rise of Death demo release – more Eternal Evil at their rough, speedy preferred method of madness.

Eternal Evil aren’t going to be one of those thrash revelations that changes the scope of the scene. It’s all about aggression, pushing tempos and riffs to their limits, then executing on the next idea. If you live for that early thrash with evil intentions, this record should satisfy.