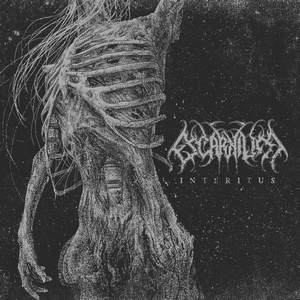 Perhaps there needs to be a label out there that reads ‘steamroller death metal.’ Because when you hear an album such as Escarnium’s Interitus, it really is the most apt description – this is the type of material that just barrels you over and flattens you with its heaviness. It’s not that Escarnium are the first to this this, but they know how to doll out the punishment, riff-wise.

Taking the speed first and ask questions later approach, “While the Furnace Burns” opens the album in an impressive way. The intensity of bands like Immolation and Vital Remains at their most brutal, what’s most impressive is the heaviness to the guitars through all of this. The band might frequently launch into frantic speed (see “Radioactive Doom”), but the riffs are thick and rather full of life for the most part. They keep things gripping, between the raging and energetic riffs and the very upfront vocals that possess an inherently evil quality to them in the best of possible ways. Of course, the band is helped out by some sneaky melodies that are tossed into the fray, along with some moments of slowdown to break things up. Longer cuts like “Starvation Death Process” and “The Gray Kingdom” excel in providing just a little bit more in this regard, with the latter opting for a more ominous and groove-based opening before the band accelerates into their usual blasting.

If you are looking for an album that will knock you back in your chair, Interitus will certainly fit the bill. And as such, it executes it’s game plan perfectly. Fast, brutal, and dark – what else do you really need with a death metal album?