Ephemerald – Between the Glimpses of Hope (Inverse) 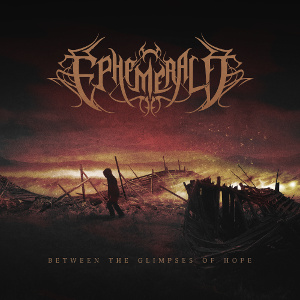 A new band within the symphonic/melodic death metal ranks, Ephemerald takes a straight-ahead approach without abandoning the ‘epic’ qualities of acts like Wintersun (or to a lesser extent Brymir). It’s a bombastic approach, but one that always feels digestible and urgent. A quality that should attract many who seek that melodic death sound that makes one want to light a sword into the sky.

There’s an almost folk metal lean at some points with Ephemerald, if it wasn’t already implied by the band references above. Some acoustic guitars occasionally take centerstage (notably in the melodic “All There Is”), and it gives a greater sense of intimacy to songs like “Til the Sea Swallows Us Whole” before they pick up the pace into more sprawling and epic riffs, augmented by rousing synth backup. What does seem to stand out quite a bit is that despite the grandeur and cinematic sound that the band can generate when they toss a melody on top of the triumphant sounding synths, like in “I Bear Fire,” they can maintain a good sense of aggression AND they do a great job of cutting out the filler. Don’t expect to find overbearing, 8-10 minute epics. They leave the songs at a brisk 4-5 minutes and it feels more rewarding (and interesting) because of it. “Servant” puts forth frantic riffing, thrilling melodies, an ethereal chorus and atmosphere, and wraps it all up into a concise 4.5 minute package.

Wrapped up in dynamics, from harsh vocals (and some effective clean ones) and speedy riffs/mid-paced melodies, Ephemerald hits all of the sweet spots you’d expect them, and offers an enigmatic sound that’s enhanced by the band not wasting an extra moment. Between the Glimpses of Hope takes the epic symphonic sound of many an act and doles it out with plenty of gusto and charisma.