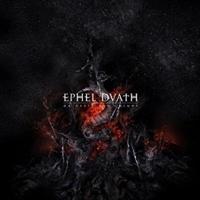 Prior to On Death and Cosmos, the goal of Ephel Duath was to never let the listener quite “get” them. As in, their music was more avant-garde than it should have been, and it certainly was reflected on awfully difficult albums like Pain Necessary to Know and more recently, Through My Dog’s Eyes. Be that as it may, there were some threads of minor genius; not Celtic Frost or Arcturus genius, but just enough shards of intelligence to justify the outwardly complex nature of their music. Guess you need to have some form of leeway when one names an album Through My Dog’s Eyes, right?

Since the release of Through My Dog’s Eyes, band leader David Tiso has totally reformatted this ensemble, adding singer Karyn Crisis, bass wizard Steve DiGiorgio (Death, Sadus, Testament), and ace-drummer Marco Minnemann (Necrophagist, Paul Gilbert). Emerging the 3-song EP On Death and Cosmos, Ephel Duath have subsequently taken a lot of the left-turns out of their music, with a basic Norwegian black metal feel to it, especially in Tiso’s riffs that hum and writhe like modern day Rebel Extravaganza Satryricon on “Black Prism.” Crisis is still very much an imposing figure on the vocals, as her feral rasp has turned more ugly, thus giving ED more sharp edges and fangs.

Like their previous efforts, On Death and Cosmos is still very much evasive. These songs don’t stick, save for the opening, softer moments of “Raqia.” The rest (which isn’t much, obviously) sort of bob and weave with black metal’s more angular side, not quite sure where to zig or zag. Guess that’s part and parcel with Tiso and co.