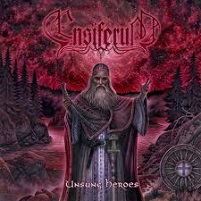 Ensiferum weren’t necessarily the first band out of the epic/folk gate, but they’re probably the best, or at least the most consistent. One jaunt through 2009’s thoroughly captivating From Afar supports that notion, as the Finns were able to brandish a mighty sonic sword that kept the speed on 10, the jovial acoustics ‘a hustling, and above all else, managed to bring a sort of mild sophistication to a style that is usually anything but. Essentially, Ensiferum doesn’t play the stupid, folk metal game, and on Unsung Heroes (their sixth overall), they manage to stay the course with sterling results.

vocal work of guitarist/founding member Markus Toivonen and bassist Sami Hinkka come across as the early, defining element here. While the triumphant, trumpet-pumping bravado of lead cut “In My Sword I Trust” is standard Ensiferum fare, the melodic vocals of Toinoven and Hinkka congeal with the band’s sound in ways they haven’t quite fully exploited until now. The title track and especially “Burning Leaves” benefit most from their inclusion, adding a sort of power metal but not power metal angle to the proceedings.

of bombastic glory, preferring to hitch their wagons to sturdy riffs and buoyant melodies. “Last Breath” is perhaps the most telling of this, as the band’s trademark riff style pumps out a few noticeable gems, especially in the song’s chorus. And perhaps as a way to prove they still want to go the epic route, album closer “Passion, Proof, Power” clocks in at nearly 17 minutes, complete with vast choirs, thus resonating as the album’s most adventurous and tried-and-true moment.

Considering the only real competition Ensiferum has is Eluveitie and Tyr, they appear more than willing to settle into their mid-years as a reliable, take-no-chances ensemble. Unsung Heroes doesn’t have the sort of boundless energy its predecessor has, yet it’s the kind of album that spews quality, and it’s quite possible we underscored this one. The Finns strike us as a friendly bunch, so there’s no real concern about taking an arrow (or ax) to one’s blindside.