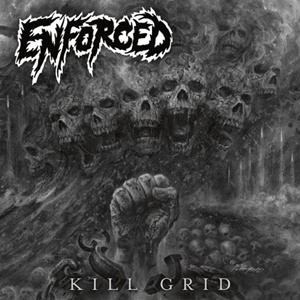 Thanks to the success of Power Trip, a newer generation of crossover thrash/hardcore has been gaining steam in the label ranks. From Richmond, Virginia comes Enforced – together since 2016 and releasing two demos and their At the Walls full-length before signing to Century Media who issue the sophomore Kill Grid record. Incorporating a mix of influences from the 80’s, 90’s and today’s market, the quintet deliver a crunchy, heads down affair amidst these nine tracks, chock full of smartly addictive hooks, raspy screams, and the sense that bodies will fly side to side or catapult from the stage when airing this material on stage.

A slow buildup leads to a militant riff/tempo interplay for “The Doctrine” – drummer Alex Bishop riding the cymbals for all their worth before the thrash madness begins and vocalist Knox Colby roars like a beast against the Slayer-esque guitar parts and semi-melodic leads. A haunting keyboard-led intro gives way for “Beneath Me” – a 2:30 blitzkrieg of crossover-style riffs that would make the Cro-Mags and Power Trip proud as Knox again leads with a clearer spitfire vocal address that cuts itself from the Max Cavalera cloth (along with a breakdown that could be a clear cousin of “Territory”). The guitar tradeoffs and harmonies for “Curtain Fire” from Zach Monahan and Will Wagstaff may remind people of the classic King/Hanneman Slayer days, especially during the South of Heaven period – and their instincts plus passion allow Enforced to push this street-level ethic to the underground hordes who love raw hardcore angst against spirited metal muscle. Throughout the album the listener has plenty of pivot points for maximum headbanging engagement – favorites for this scribe include “Blood Ribbon” and the seven-minute plus title cut, the latter featuring longer instrumental sequences cutting across like a Nuclear Assault/Sacred Reich montage.

Aligning with ubiquitous producer of late Arthur Rizk for mixing/mastering ensures the record has that lively in your face punch on all fronts. Kill Grid isn’t the most original ‘crossover thrash’ record of its time – as this scribe can point out specific passages that exist 25-35 years earlier on Kreator, Sepultura, and Slayer efforts. But the positive outweighs the negative and given more touring and experience Enforced can prop themselves into diverse tours to spread their sound into a fervent fanbase.