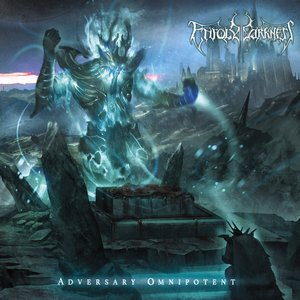 Astute followers of the melodic death metal may remember Enfold Darkness’ first full-length, Our Cursed Rapture, from back in 2009. It did a good job of merging blackened influences into a melodic death metal format (one that was more The Black Dahlia Murder than say, Dark Tranquillity), but then the waiting game began. We’ve only seen two singles from the band since, so it’s been 8 years since we’ve any significant material from the act.

Picked up by the increasingly impressive label The Artisan Era, Adversary Omnipotent should easily satisfy those who’ve been clamoring for new material, as well as introduce the band as a force to be reckoned with for new listeners. If one couldn’t guess from their label, there’s some technical/progressive material to be found in Enfold Darkness’ approach, but it’s never too far over-the-top and simply serves to further the narrative. The band’s black metal influences help to give them more of an individual identity than most of these acts, as well as give them a fallback to introduce more atmosphere into their material. Truthfully, that is what sells the album as a whole. The constant blurring of black and death influences and the merger of technically impressive material (all across the board, not just guitars) with genuinely dark and sinister blackened atmosphere (all accomplished without being reliance on orchestration mind you) sells itself again and again as you listen. The tracks are wonderfully diverse, going from the creeping and brooding (“Invocation”) to frantic barnburners (“Lairs of the Ascended Masters”), and hitting everything else you might possibly want – sometimes in the course of a single track, like closer “Vanish into Damnation.”

8 years is a long time for a new album to come, but Enfold Darkness show they have grown and matured over the timespan, and Adversary Omnipotent has been fine-tuned for maximum enjoyment. It’s a lengthy affair (over an hour), but the band keeps it engaging and diverse enough that no one is going to be griping over it. When all is said and done, this album should rightly impress many people for its unique blend of extremity.