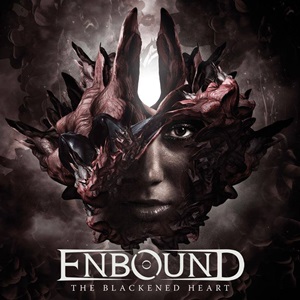 These days it’s not easy to stand apart from the pack in the metal realm. So, if gold-themed visual band promo photos garner another look-see for Enbound on their 2011 debut album And She Says Gold, who is this scribe to disagree with the added attention (remember when Metalium did it)? Five years later, we finally get to hear the Swedes follow up in The Blackened Heart. It shouldn’t be a surprise that this Swedish quartet live for a melodic metal montage that can be power riff driven one moment, then shimmering in a catchy arena rock manner the next, especially in terms of specific musical hooks or choruses.

Reference points vary depending on the tempo and feel of a certain track – opener “Falling” may start out vocal-driven, but the follow up riff and pomp-oriented keyboard sequence rips a page out of the Khan-period Kamelot heydays, while mid-way through “Twelve” gains an emotional mishmash of low-tuned staccato crunch and alternate vocal harmonies that gain credibility for the Tad Morose/Evergrey camps. Some of the keyboard sequences elevate the material to 80’s flashbacks, “Holy Grail” for certain making me think of Top Gun/“Danger Zone” flight maneuvers, even as the guitars glide in power splendor. Guitarist Marvin Flowberg produces exemplary rhythm work and sets the break bar to stun throughout these 10 tracks – one minute being heads down heavy for the commercial-tinged “Give Me Light” while treading classic up-tempo metal on the fervent closer “Make You So Unreal”.

Drummer Mike Cameron Force has the elite fill tool box of tricks down pat while also keeping the proceedings solid and in the pocket when necessary – but the standout member that elevates Enbound from the pack in this genre is singer Lee Hunter. Also known in AOR/melodic rock circles as Lars Säfsund (Work of Art), his delivery contains the upper echelon nuances necessary to go over tremendously. But he also has that lower vibrato and arena-like / AOR flavorings that make the previously mentioned “Falling”, majestic “Crossroad” and emotional “Feel My Flame” (featuring two bass solos by guest Symphony X bassist Mike Lepond and Enbound’s Swede) the stuff of legends. It’s difficult to hit clear-cut comparisons, but there is a lot of Urban Breed and Toto’s Joseph Williams in his confident note choices and emotional magnificence placed into the vocals – definite to garner attention for Enbound the more people hear this.

Up-tempo melodic metal of the Euro kind, The Blackened Heart may not necessarily win over as many stateside as it will in favored territories like Germany, Scandinavia, and the Far East – but do not let you deter you from enjoying the supreme quality and catchy songwriting within.