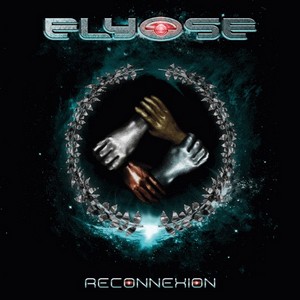 Before much of the metal world became hip to implementing more modern electronic elements, France’s Elyose began perfecting their industrial/electronic/metallic art in 2009. For their third album, the band has decided to increase the metallic components of their formula, and the results speak for themselves. While previous efforts were strong, Reconnexion feels like their most complete and realized release to date.

Combining uptempo danceable electronic beats, industrial pulses, and fully embracing their metallic core, Elyose have a unique and captivating feel. If you look at one of the album’s heaviest songs, “Psychosis,” you can move from a thick, metallic riff with guest growls from Mark Jansen (Epica/MaYan) and the next you could be hearing a more gothic vibe or bouncy synths with ethereal singing from vocalist Justine Daaé. A few of the tracks feature guest ‘growlers,’ which does effectively bump the heaviness and create a stronger diversity within the album, though it’s not a big stretch from where they were previously. However, the tighter weaving of the electronics and crunchy riffage is quite frequently where they shine. Opener “Un Autre Eté” utilizes some driving electronic components alongside the groovy guitars to achieve an absurd level of catchiness without losing the heaviness. The band’s first single, “Mes 100 Ciels” has an almost dance/runway feel to it, going so far as to include some rapping from Aurélien Fouet-Barak in a few spots. It’s an oddly strong pairing, and demonstrates the band’s ability to move outside of the box. Other songs like “À Coeur Perdant” and “De Tout Là-haut” show how some darker riffs can be introduced, yet they retain an accessible and notable melodic edge. Some of this no doubt due to the enthralling vocal performance of Justine Daaé, but because the riffs just hit hard and frequently, with “La Veuve Noire” being a forerunner in the favorite department. Ending the album with an acoustic rendition of “Contretemps” offers some quiet reflection and allows Daaé some space at the forefront.

Performing in a space that feels all their own, even with growing numbers of bands employing an electronic component, Elyose can capture the melodic tones that many strive for without sacrificing some metallic and industrial heft. Reconnexion is a bright spot of creativity for modern metal fans.