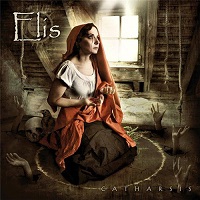 apalm Records continues to distance itself from bands like Elis, who represent the label’s halcyon days. Good days those were, but like anything, matters got a little glutted (seriously, how many female-fronted bands do we need?) and the label diversified. For Elis, this might prove to be a double-edged sword, as Catharsis rolls out like a pretty standardized female-fronted Goth metal album, something not even the Napalm name can push across the threshold.

After the tragic death of singer Sabine Dünser, the band recruited Sandra Schleret (ex Eyes of Eden), who does an admirable, albeit unremarkable job onCatharsis. Her voice fits in the pocket of the band’s hook-laden Euro-Goth stylings and it does wonders on “Warrior’s Tale,” and “Firefly.” Schleret is sultry when she needs to be, although she never strays from her comfort zone, something that will no doubt be tinkered with down the road.

Elsewhere, the band gets a little out of line on the very Leaves’ Eyes-derived “Twinkling Shadow” and “Morning Star,” two songs that do the band no favors. However, “Come Undone” is simply the best Doro song never record; a jam that would no doubt make the German metal siren proud. It’s a total homage and a damn good one at that.

In the end, Catharsis is a little above average fare for female-fronted Goth metal and that just does not cut it anymore. Once a little subgenre, femme-intensive Goth metal has morphed into unmanageable sizes, thus increasing the margin for error in this here-today, gone-tomorrow world. We’ll take “Come Undone” and leave the rest for the real bottom-feeders.