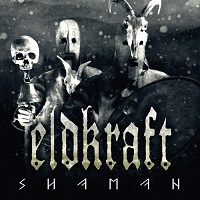 Veterans of the Swedish metal scene hook up for an exercise in epic-tinged metal…that never happens! Alas, it does, this time with Eldkraft, the product of Horde of Hel/ex-In Battle members H. Karlsson and J. Sandin. Their 2011 formation might have cut out the critical demo process, yet their Shaman debut displays a respectable vocabulary when it comes to triumphant Scandinavian metal. Just don’t think this holds a candle to Tyr or King of Asgard, because it doesn’t.

The brutish vocals of Sandin are the first sign of troubled waters for the band. He’s not what one would call “melodious,” instead sounding like a tuneless, barbaric ICS Vortex. Even relating him to Mr. Vortex is a bit of a stretch on our part, as his sung portions don’t have the power and conviction that Vortex’s selections do. An acquired taste for sure, Sandin’s vocal flavorings may give Eldkraft some legitimacy in the world of epic/Viking metal, but he’s the ultimate detractor across the album’s ten cuts.

Underneath Sandin, there’s at least a few songs worth circling the wagons for, most notably the seven-minute “Ursprungkallan,” a number that could probably hang with Thyrfing’s more epic moments. The adventurous “Patterns” is a cool in a Borknagar kind of way, as is “Grey Man,” but Sandin’s vocals…they’re as ugly and uninviting as a Viking’s rear-end.