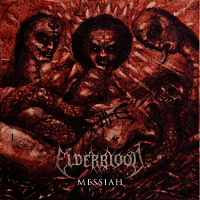 Speak of Ukrainian black metal and of course, the first name that comes to mind is Drudkh. The men-who-shall-not-be-named (or interviewed, or give live performances) have put the country on the BM map, leaving the door open for a band like Elderblood, who came to be in 2011. While Drudkh is stripped-down, raw, and emotive, Elderblood sound like an Eastern Dimmu Borgir, purveying quite a few of the symphonic storm elements that made the Norwegians a commercial, and, polarizing entity. Elderblood can’t match Dimmu wit-for-wit, but on their second album, Messiah, they put up a good fight.

Supplemented—surprisingly so—by a production job fitting of professional and/or Dimmu standards, Messiah hones in on symphonic black metal’s ground zero. As you would expect, a steady dosage of programmed horns, keys, and what-have-you make due with punishing riffing, a deluge of blasts, and the occasional staccato churn of the guitars (think Behemoth). In turn, the crisp tumult of a number like “Invocation of Baphomet,” or the speedy “Satana” show Elderblood is more concerned with being brutal than horsing around with a large-scale orchestra. And since the symphonic action doesn’t get in the way, numbers like the melody-driven “Devil in the Flesh” and climatic “In Burning Hands of God” (far and away the biggest Behemoth/Dimmu composite here, Goth clean vocals and all) are left to their own competent devices.

It would be entirely wrong to say Elderblood is bringing symphonic black metal back to its roots, for the subset was a commercialized and/or more listenable outlet of BM to begin with, thus, there’s no starting point. However, the odds are in the favor of Elderblood, who with Messiah, blaze what is now the path-less-popular.