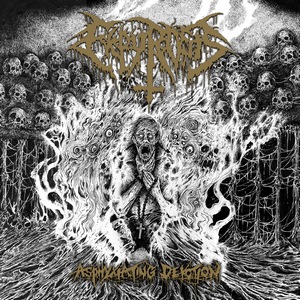 Always fun to learn a new word here and there – take the term Ekyprosis, for instance. It refers to a Stoic belief that the universe was in a fiery cycle of birth, cooling, and rebirth. Sounds pretty metal right? These Italians in Ekpyrosis come out in their own fiery way with their first full-length in Asphyxiating Devotion, after some prep work with a few demos and an EP.

If your initial impression based on the cover art is that of old school death metal, than said impression is certainly on point. Following the lead of the perpetual masters Incantation and Immolation (complete with pinch harmonics), dark and blasphemous metal oozes from the speakers after a short yet effective mood-setting intro kicks “Profound Death” into high gear. The usual tempo shifts come into play, with the band going from all-out blasting and chaotic, swirling riffs to that of the doomy, cavernous blend – though admittedly without all of the boggy and muddled production work that is increasingly becoming the norm in this field. Instead, the production has a suitable murkiness to it without taking away from the instrumentation itself, which pleasingly includes some basswork that draws to the front of the room. Outside of the opening track, the band also keeps the music short, sweet, and to the point – oppressive riff monsters such as “Obsessive Christendom” and “Depths of Tribulation” doing what needs to be done in under 4 minutes, and even cuts with doomier segments like “Incarnation of Morbidity” wisely tightening the reins. All of which makes for a tightly focused and productive effort that never drags.

It may not cover much in the way of innovation, but the old school goodness is flowing forth from Asphyxiating Devotion. There’s a firm grasp of the concepts at hand, and the songwriting keeps it tightknit and constantly moving. A welcome new face to the death metal crowd.