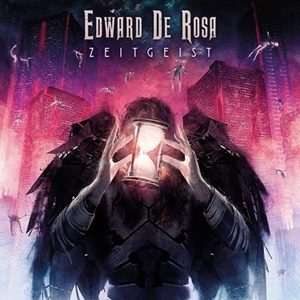 Probably low on the depth chart for recognition, Italian guitarist Edward De Rosa has been a part of power metal band Soul of Steel as well as a live guitarist for gothic/progressive metal act Elegy of Madness for background purposes. Recruiting Rhapsody of Fire vocalist Giacomo Voli and fellow Elegy of Madness members keyboardist Luca Basille and drummer Francesco Paulo Caputo, he ventures into his first solo foray for Zeitgeist – sure to illicit splendor for those who dig neoclassical charged power/progressive metal. Beyond the obvious cover art themes (hourglass/check, armor-clad warrior/check, purple hues), these ten tracks run full spectrum into a guitar-driven affair that may remind many of the late 90’s/early 2000’s output when these subgenres generated quite a following, especially from the Teutonic and Scandinavian territories.

The bombastic/cinematic “Tempus Fugit” intro sets the stage for “Legend: The Omega Man” – an up-tempo, Stratovarius-ish driving number that showcases not only Giacomo’s pipes but of course Edward’s axe talent with a lengthy lead break of arpeggios, taps, and classical training. Edward loves his shred heroes like Yngwie Malmsteen and Timo Tolkki, but there is that additional Rainbow/exotic depth that makes the longest track “Ghost of the Ruins” at almost eight minutes special, the haunting low background chants and specific keyboard tones adding a heighten awareness to the measured pace and segment flow. The tranquil “Tywysoges” features Virginia Pavone on guest duet vocals, a ballad that begins on an acoustic folk note before kicking in with electricity, a moody track that showcases Edward’s proper understanding of circular harmonies. “Fight for Life” is another track that hits upon Celtic-guitar themes, conjuring up images of Gary Moore and Elvenking, the short vocal passage delivered in Italian midway through although the power shift at the three-minute mark into Priest territory threw me for a shock.

Very economical at 48 minutes (we all can name bands/projects that easily eclipse an hour per record), Zeitgeist will find favor for Stratovarius, Yngwie, and Rhapsody Of Fire fans – especially those who dig the singer/axe power/progressive metal mold Edward De Rosa delivers here.