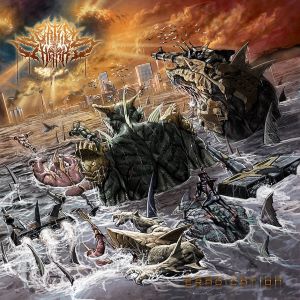 Shark metal?  Admittedly drawn to this one due to the name of the band – it’s one of those things you have to verify for yourself to see what it sounds like.  Eaten by Sharks could be something that ends up being a parody, or it could be something damn brutal.  This Canadian falls squarely into the latter’s territory, providing visceral and groovy death metal with a ton of bite (pun intended).  Eradication may draw some heads due to the band’s name, but it’s far from being a gimmick.

A concept album at its core, Eradication tells the tale of a full-on shark assault on mankind (hence the cover art).  But as with much in the death metal world, you can dig deep into it (and you certainly can here with Eaten by Sharks) or you can ignore it and settle for a large helping of bone-crushing grooves.  Either option is a winner, as the band are well-versed on what works in death metal, effectively blurring the lines between old and new school – taking what works best from both and applying it to their sound.  You’ll hear flourishes of tech and modern grooves, but the focus on ‘the song’ feels distinctively old school, and they never really go too far into ‘let’s play at 300bpm and shred’ territory.  Instead, dread plays its way into their sound amid the rumbling grooves and it’s a great merger considering the aquatic landscape of the band’s concept.  Balancing that groove-forward feel while keeping things intense, each of the seven cuts is worth mentioning, but for the sake of brevity, we’ll stick to a personal favorite in “Kill and Consume,” which rolls up galloping death/thrash with stomping groove moments, all with a grand emphasis on melody (love the short lead and later solo) that will easily stick the song in your head for a few days.

Eradication is the best type of death metal.  It’s big, heavy, and explosive, but it’s still fun to listen to.  The songs stick with you, while giving you the bludgeoning you’d hope for.  Plus, it’s sharks!  Not another lame zombie or serial killer romp, but deep sea underwater madness!  Kudos to some extreme originality.