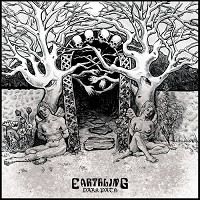 Not exactly surprised that a band called Earthling has a natural, uh “earthy” feel. It’s part-and-parcel with coming from the South, Virginia, to be exact, although one could attest that relative locals GWAR, Municipal Waste, and Lamb of God don’t have any of that type of flavor. Outside of the gut-punching guitar solos (the only element of flash here), the band’s Dark Path debut album blends crusty d-beat punk metal with the slow burn and churn of doom. A relevant combination, definitely, but hardly worth going all-in for.

The immediate takeaways from the six songs that comprise of Dark Path are largely with the organic feel that comes on through when the band starts to grind in a thrash-like manner. One could confuse some of the more ballistic moments on the opening title track and “Losing Sight” with primal black metal, but Earthling’s overall makeup translates to a band more concerned with landing direct blows with simplicity rather than wowing with sharp production values or sleek riffing. Point being, there’s nothing fancy about the album (which is fine, mind you), and while drummer Brently Hilliard’s thin pitter-patter on the snare is cool from a throwback vibe, it takes away from the band’s firepower.

A blue-collar, no-frills release such as Dark Path is a sign of the times, nothing more. No bells and whistles, no angle worth getting pumped about, and no songs that offend.