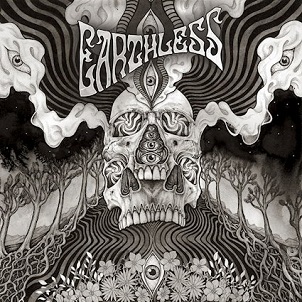 Somewhat of a Karma to Burn-like situation here: An all-instrumental band enjoys success with the format, people start poking around, asking if they’d like to hire a singer, band gets signed to a large label (Nuclear Blast), and, all of the sudden, here come the vocals. While it’s not a sure thing Earthless had to tack on vocals to join Nuclear Blast’s roster, but you be damned sure the powers-that-be know the limitations of instrumental bands, which is why Black Heaven (the band’s fourth full-length) is perhaps a pleasant surprise for all parties involved.

Caught somewhere between the freewheeling-down-the-highway sound of Spirit Caravan, or heck, even most of Wino’s projects, and the feel-good vibes of say, Kyuss off the weed, Earthless obviously benefit from Isiah Mitchell’s vocals. Mitchell, who also doubles on guitar, could sub in for any variety of classic rock bands and feel at home. His easy, trouble-less style is where opening “Gifted by the Wind” gets it shines, especially when the man goes harmonic. The classic rock buzz of “End to End” hits all the right stoned-out angles, including a rather monstrous, burning solo from Mitchell, while the amped-up title track is a brush with all things Sabbath volume.

Operating with the necessary instrumental space for elongated jams, Earthless carefully split the divide here, offering up an effort without much in the way of total rock ingenuity, but instead, a not-so-cautionary tale when an instrumental band adds vocals. Reminder: These things rarely work out. In the case of Earthless on Black Heaven, they do.