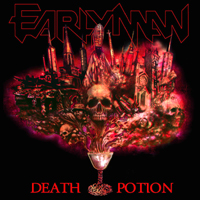 Early Man might be in the same discussion with bands like Enforcer, White Wizzard, and Holy Grail had they followed up 2005’s Closing In a tad more quickly. Like, much more quickly, especially in today’s here-today-who-are-you-now world. Death Potion has been in the can for well over a year now, only seeing the light of day in the summer of 2010. Frankly, it might be too late for these guys to latch onto the retro metal bandwagon and even if this did come out a few years ago, it would fail to match.

Unlike the aforementioned trio of bands, Early Man is more derived from pre-1985 thrash metal than anything. In fact, there’s about a dozen ideas lifted from Kill ‘Em All, as well as various Metallica vocal cadences (ref: “Unseen Tormentor” steals the pre-chorus from “Frayed Ends of Sanity”). Singer/guitarist Mike Conte has a limited vocal range to begin with and it’s not helped by the out-right dumb lyrics on “The Undertaker’s Calling You” and title track.

Tempos are kept in the mid-paced area, which ends up working in the band’s favor, as it gives numbers like “By the Serpents Breath You Seethe” some added melodic flair, especially in the form of quick guitar harmonies. Beyond that, the natural and raw production job ends of giving Death Potion a less biting, less heavy sound. It’s almost a bit timid in comparison to overly-polished productions of the modern era. Then again, picturing Death Potion with a clean production doesn’t make sense, so it cancels itself out.

Since there’s nothing remotely inventive about Death Potion and it’s wimpy sounding (did we just say “wimpy” in the context of metal?), Early Man has some major catching up to do if they want to have any shot at matching Enforcer. This is the problem with retro metal: When it’s bad and unconvincing, you feel like metal has set itself back a good 15 years. Scratch that: 25 years.