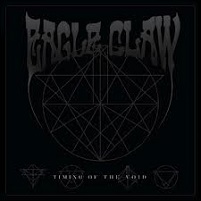 As told to yours truly by The Sword’s Kyle Shutt, one can’t walk down the street in Austin, TX without tripping over a musician. The city’s vibrant music scene is currently all the rage and will probably continue to be as such, as long as South By Southwest remains the country’s preeminent musical gathering place, and Johnny-come-lately’s from Topeka, Kansas have aspirations of “making it” in the music business. They’re in for a big surprise when they learn of the rapidly-decreasing importance of mechanical royalties.

More than unlikely not concerned with royalties of any kind are Austin-based instrumentalists Eagle Claw, who on their sophomore Timing of the Void effort bring to life a distinct homage to twin-guitar 80’s metal, just without that sometimes-awesome, sometimes-meh classic metal bent. Comparisons to Pelican, Russian Circles, or Long Distance Calling are ill-founded, for Eagle Claw happens to be heavier than all three bands and don’t have the same aversion to guitar solos. In essence, Eagle Claw is like a Maiden/Sabbath hybrid, just without a singer who loves Teleprompters and a frontman who enjoys fencing.

The album succeeds by way of its searing guitar tone, which is as domineering as any one of the New Orleans sludge bands, but with infinite more clarity. “Deathgate” (which closes out the album) is where the tone works its magic, as guitarists Matt Rade and Michael Gonzalez let out a slow burn of massive proportions, the type that wouldn’t be out of place on a Corrosion of Conformity album circa 1991. Yet, it’s the spiraling twin leads of “Diagram of the Tempest” and all-out heaviness of “Book of Water” where Eagle Claw make their mark, promenading those big riffs and driving tempos, sure to make any patch-loving fiend throw his back out via head-whipping.

Without the atmospheric element that virtually every and all instrumental metal bands flock to, Eagle Claw have a good thing going with Timing of the Void. Chances are, they’re kicking it in some backroom bar as you’re reading this, regardless of how early in the morning it is. Rust never sleeps, you know?