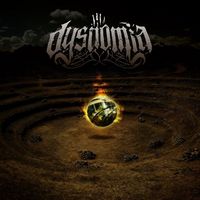 Dysnomia were formed in 2007, then split, then got back together early this year, meaning there is a chance they swiped their moniker from the Omnium Gatherum song of the name. (No shame in that.) Hailing from Spain, the band actually does play an upward brand of Finnish-sounding melodic death metal; not in the OG vein, but more along the lines of Eternal Tears of Sorrow and Mors Principium Est, which instantly suggests these guys can hang, which they do on this self-titled effort.

Flanked by an ultra-crisp production job (think, of course, of any number of similar-styled albums that came out of 00s and there you go), Dysnomia don’t spare the melodic rod across the album’s ten songs. The band’s riff template may be familiar, yet they have some serious spunk to them, whether it’s on the mobile “Light the Spark Ignite,” and album standout “Into the Void of Your Eyes,” which also serves as the album’s technical apex. Lots of fingers and keyboard patterns flying. Elsewhere, the brash “Reach Clarity” evokes visions of early 00’s Dark Tranquillity (think Damage Done), while the keyboard-dominated “Behemoth” stays in line with the album’s overall approach of knifing melodies and soaked-in-acid vocals.

Per the usual with melodic death metal, there is very little new ground in which to explore. This naturally, limits the scope and flexibility of relatively young bands such as Dysnomia, but when the proverbial sweet spot between quality production values and enjoyable songs is found, there’s little to gripe about. And for a while, it was easy to get burnt out over this stuff, yet snappy, fully promising bands like Dysnomia can probably keep melodic death metal fresh for the foreseeable future.