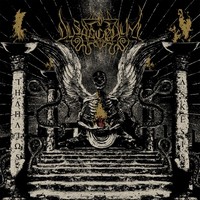 Rooted firmly in the second wave of black metal’s sonic aesthetic, Germany’s Dysangelium seeks to add yet another chapter to the genre’s storied history, showing that almost thirty years after names like Euronymous, Fenriz, and Count Grishnackh began tinkering with what would become perhaps metal’s most controversial and nearly mythical subgenre, the Stygian atmospheres and infernal ferociousness of black metal resonate just as determinedly today. While the group’s reverence for the style is admirable and the songwriting fitting, production shortcomings ultimately mar what might have been an intriguing blackened presentation.

Dysangelium follows the BM blueprint very closely, preferring repetitious phrasing to build atmosphere over dynamic riffing, but the record’s production style ultimately undercuts much of the effort. The overall sound, while certainly not mixed at Skywalker Ranch, rests on the cleaner side of the spectrum, and while it’s not clean enough to give the instrumentation weight, neither is it lo-fi enough to truly immerse listeners in a dissonant soundscape. The result is a meandering record that safely treads the water of BM classics but never achieves the same aura as that of the genre’s godfathers. The album’s final track, “I Am the Witness, I Am the Servant,” for instance, runs at nearly eight minutes and serves as the record’s epic finale. The musicality is all accounted for and should certainly be able to transport listeners to that auditory netherworld we crave so much, but the flat presentation turns a would-be odyssey into more of a marathon.

To give credit where it’s due, Sektarist 0’s vocals, which uncharacteristically wander in the midrange more than the shrieks, frequently achieve the right balance of anguish and malice required for a solid vocal performance in this vein, and his Attila Csihar-esque droning in “Ave Obscuritas Incarna” is mesmerizing. Likewise, moments of punchy riffage come through the murk, particularly in “Murmura.” These moments of glory, however, are not enough to redeem the record from mixing-room mediocrity. Atmosphere is paramount in black metal, and when that element vanishes, what’s left just isn’t all that compelling.