Dying – No Mercy for Us (Sevared Records) 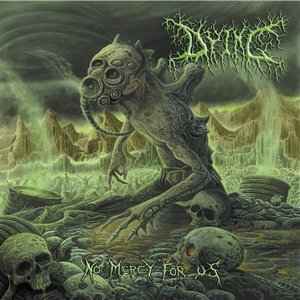 Death metal on Sevared Records. Seems straight-forward enough if you are a betting individual. The label seems to attract a certain type of death metal, and if you go in with that mindset, you are bound to be pleasantly surprised. While this does encapsulate a brutal death metal sound, it’s not just the vanilla, paint by numbers version some may expect it to be.

Dying feel more akin to the ‘90s flavor of brutal death metal, but again, don’t go down the most straight path in getting there. This Spanish act instead chooses to blend in some more thrashy elements into their sound, and do a good job of trying to reach more diversity in their approach. Vocally, things are going towards the genre-standard, with throaty barks making up much of the approach here. But the music goes between the aforementioned thrash influences, some well-placed grooves, and ‘90s-esque technicality (think more Suffocation than anything else). In short, it’s a combination that will still feel somewhat similar, but for acts sticking around in this field, it doesn’t feel as stale or as dated. The mix of influences give the songs the ability to shoot past the five minute mark without sounding tired, and the tempo switch-ups aid here as well. Some melodies also crop up and add more depth without compromising the approach. “Torturer God” begins with some acoustic guitars, and “Chronicles of Insanity” revels in some doomy riffing before accelerating. A strong bass performance rounds things out, giving you plenty to dive into over the course of the album.

An enjoyable death metal release that tips its hat to a number of different eras and styles, No Mercy for Us keeps it fresh. It might have been 8 years since their debut Born from Impurity, but Dying return with a vengeance. Solid and well-written.