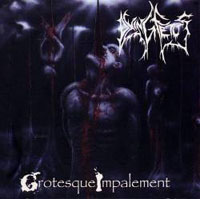 A handful of bands do reissues the way they are supposed to be. Carcass’s reissued library with revamped production and full videos of the band explaining how the albums were created and Atheist’s reissues with a fuller production and full demos of the album (especially Unquestionable Presence with Roger Patterson’s bass tracks) are how it’s done properly. Very few bands in metal do it as that good and make it that worthwhile.

Most of the time, and usually due to greed from the various record labels, reissues are a waste of time. They are usually the same exact album except for a couple of live versions of a few songs from the album or a demo version of another song. Maybe there are expanded liner notes or new photos or even an altered cover; some minutia that is easily overlooked.

Translation: Meaningless for anybody who already owns the album, but dandy for someone who doesn’t.

Maryland’s Dying Fetus (and Relapse) fall into the latter category as Grotesque Impalement, like the rest of their reissues, just doesn’t warrant a purchase unless the consumer does not already have the album. There just isn’t enough added to the album, or in this case the EP, to make it an essential purchase.

However, the album itself is quality American death metal and the previously unreleased track (“Reduced to Slavery”) is a bonus. It’s full of slick breakdowns and crushing guitars coupled with savage drums, and it’s obvious as to why Dying the Fetus are so popular. They have always tended to release good death metal that fans of the genre soak up.

With that said, and just like in my review for their Killing on Adrenaline reissue, I’ve never been big into these guys, thus the relatively low score for such a “classic” of a release. I’ve always liked this record the most out of Dying Fetus’ discography, mainly for the crippling duo of “Bringing Back the Glory” and “Tearing Inside the Womb,” but other than that, it basically boils down to it being above average American death metal. It was when it first came out in 1999 and it remains that way today.