DüsterLust – At the End of Time (Self-Released) 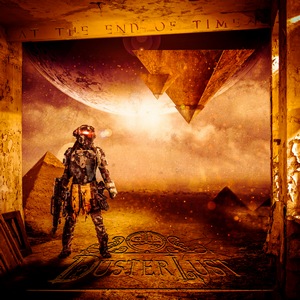 For the most part, when one hears a description that sounds like a symphonic metal album with a female lead vocal, there are certain assumptions that are going to take place about what it sounds like. DüsterLust takes advantage of this and manages to subvert those expectations into something that more unique and appropriately apocalyptic.

Starting off with some darker tones and deeply growled lines, it’s obvious from the start that DüsterLust aren’t out to simply retell the same symphonic metal fairytale. “We Want More” continues this defiance, with some epic synths and heavy and twisting melodies having a strong sense of urgency, with growls and operatic female vocals giving a fitting level of chaos. It almost really feels like a story being told than a simple track with the variety of vocals and frequently shifting landscapes that make up the track. There’s also a lot of pleasantly intricate progressive feelings that you can pull from the song as well, allowing it to stand out from some similar bands. The title track is a much quieter affair, but still works to allow the listener a break from the whirlwind that came before it. The final two tracks (outside of the closing instrumental piece) thankfully crank the volume back up, as well as the intricacy. The dark tale weaves its way in and out of melodies and swing into different directions on a whim, always keeping you at the edge of you seat in anticipation.

A symphonic metal album that ushers in much more chaos that one might think to give it credit for, DüsterLust are onto something intriguing with At the End of Time. All of the instruments seem to have a role in the maelstrom of each track (instead of relying mostly on a vocal performance) and it helps provide an atmosphere worthy of the EP’s title. An adventurous EP that deserves a wider audience.