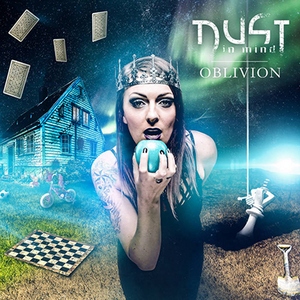 What happens when you combine the industrial metallic rhythms of Pain with some of the gloom of Katatonia and add some early Lacuna Coil to it? You probably end up with something that sounds a bit like Dust in Mind, who have managed to capture all of those emotions and feelings above, while taking some direction of their own in mind with their latest album, Oblivion.

While the opening line may have you thinking the band has done nothing of their own, that’s far from the case. Despite the three clear influences, the way that they’ve wrapped up this industrial/gothic/metal hybrid gives them enough wiggle room to claim their own space. You’ll find moments of near-death metal heaviness leading the band forward (“Coward”), other times where a danceable industrial beat carries more weight and groove (“Spreading Disease”), or they can take a 180 and allow the gothic vibes to reach the forefront with “Mrs. Epilepsy.” One thing is for certain – you are never at a loss for hooks, either in the riffing or vocal front. They manage to take the industrial edge and work it into their sound, making things catchier but never at the expense of someone trying to take the ‘metal’ label away from them. Vocalist Jen is the centerpiece vocally and a strong fit for the band, with guitarist Damien Dausch providing the beast portion with some solid growls/screams (even if the dynamic is familiar).

Those in the mood for some driving and pulsating industrial metal with some gothic leanings (without going too far) will be rewarded when listening to Oblivion. Undeniably catchy and hook-ridden material, but what will give Dust in Mind an advantage is that it still draws you back for more after the initial rush wears off. Immediate but still a satisfying and fun listen once you get to the double-digits.