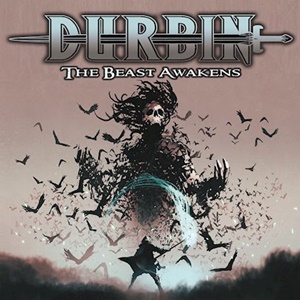 Best known to the general public as bringing the ‘metal’ back as a singer on American Idol season ten, vocalist James Durbin has flown the flag for the classic elements of the genre even if he was born well after the heights of its popularity during the early to middle 1980’s. Performing Judas Priest songs including a couple on his season’s finale with the band themselves, he ventured into a solid solo career afterwards and joined Quiet Riot for a few years delivering a couple of studio records to up his street credibility. Now venturing into another phase of his career, Durbin tackles his love of classic heavy metal – The Beast Awakens flying the flag up the pole for sterling riffs, multi-octave/powerhouse melodies, stories of hope, fantasy, dungeons and dragons, aligning to the heart of artists such as Iron Maiden, Judas Priest, and all facets of Ronnie James Dio.

What’s outstanding has been the studious and careful nature James took to writing all the music and lyrics for these twelve songs, performing rhythm guitars and surrounding himself with an array of seasoned musicians and exemplary lead guitarists to keep the quality traditional metal songs on par with his mentors. There’s no question James has the pipes, versatility, passion, and range to pull this off convincingly – he is aware he can channel the best of Dio, Halford, Dickinson, Tate, and others at the drop of a hat (check out the title track or “The Prince of Metal” for quick evidence). It wouldn’t mean anything if he couldn’t deliver outstanding melodies, lyrical content that takes you away from the doldrums or stress of today to provide fuel in fantasy and uplifting visions for the future, and solid riffing/songwriting that makes you want to stand up and shout, point the horns high, and ride like the wind. Favorites change by the day – if you love the slower, epic Dio-build, “Riders on the Wind” meets that criteria – when you want something a bit more commercially driving a la Savatage during Hall of the Mountain King, check out “Into the Flames”. Bassist Barry Sparks pounds out that low end driving thump to get “Calling Out for Midnight” into the adrenalized masses, while closer “Rise to Valhalla” ends the record on a power triumphant note, leaving you thirsting for even more heavy metal. Special guests like Chris Jericho and Phil Demmel provide bonus cherries on an already amazing debut record for Durbin.

Let’s face it – the old guard is fading away into retirement or passing away based on aging. We need musicians like James Durbin willing to stand for their beliefs, creating new songs in a style that will never die. And as long as he takes the time and energy to uphold specific standards as he has here for The Beast Within, we can hopefully look forward to a long, fruitful discography that may unleash this generation’s Holy Diver, Defenders of the Faith, or Hall of the Mountain King.