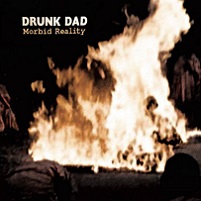 Reviewing an album by a band called Drunk Dad over Father’s Day weekend might be applicable for some, but not this scribe. Old Man Gehlke was never one to imbibe very much, but man, we sure had a good laugh enjoying the various follies of Homer Simpson, television’s ultimate “drunk dad.” Best Homer quote in reference to beer? “Beer: The cause of, and solution to, all of life’s problems.” If only that were true, right?

Hailing from Portland, OR, the same place that has given us the likes of the ultra-fashionable Red Fang and Danava, along with Agalloch, who couldn’t be uncool if they tried, Drunk Dad play the rather en vogue punk-crust-noise-metal sound, one that might help the band elude proper description, but doesn’t bode well in the quality category. Their four-song Morbid Reality EP is a sloshy outing of dirty punk riffs played at a slower tempo, coupled with feedback-drenched sections that might rattle some eardrums in the live setting, but not much else (see: “Ritual”).

It is little doubt that Drunk Dad will be one of those hard-working bands filling up the touring circuit this year, so maybe that will give them some time to reflect on where to go with their sound. For as it stands with Morbid Reality, the only thing memorable about Drunk Dad are their name and the associations it brings.