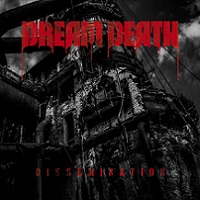 Dream Death are a Pittsburgh band, which means it’s a guarantee they are better-known outside of the city they call home. It’s a time-honored tradition, if you will: Pittsburgh fans don’t support Pittsburgh bands, but when you’re signed to Lee Dorrian’s Rise Above and have some standing in the scene, the Steel City becomes an afterthought. At any rate, Dissemination is the band’s second album after their 2011 reformation, charging hard in some peculiar, but roots-based, riff-first netherworld that benefits largely from the fantastic (and convincing) vocals of Brian Lawrence.

In reality, you could probably slot Dream Death somewhere between turgid Trouble doom and the raw-as-you-know-what channels of grimy 80s thrash. However, the band never quite takes the thrash bait, preferring to operate in the straight and narrow of mid-tempos, but serves the sludgy “Expandable Blood Flow” and the Sabbath downing “All in Vain” well. The band’s riff choices leave little to the imagination, as they’re predominantly twisted power chords and the occasional mutation, so it’s up to Lawrence to carry the load, to which he does. Still, the Sabbath edge becomes more pointed as the songs become more elongated, as found on “The Other Side.” (It should also be noted there are virtually no production tricks to be found here; it’s like Dream Death recorded the thing in their rehearsal room.)

The man possesses the rare discernible, throaty delivery, where he’s singing and shouting at the same time. Therefore, his vocal choices on “Nothing Ever Will” and album highlight “The Cold Hard Light” find Lawrence getting down with sardonic barks and heaving chorus lunges. He’s pretty close to one of those “read a phone book and it’s enjoyable” type of singers, and the reason why Dissemination emerges as a coy, unique, doom/sludge/old-school charmer.