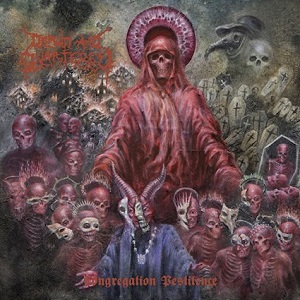 2018’s The One Who Lurks was a competent enough death metal release from Drawn and Quartered following a six year absence from the scene. Filthy and cavernous, with the usual Incantation and Immolation (and Morbid Angel) toppings that bands like this strive for. Solid, if a bit unspectacular in design. Congregation Pestilence sees them uptick the speed and intensity a bit while delivering the same rotten fury, to stronger results.

The band’s strongest suit is the intensity this time around. The wall of sound that they can generate benefits from that explosive uptick in speed, and still retains all of the grimy, dirty vibes. Opener “Death’s Disciple” is exactly the sort of barnstormer that is needed to really grab the listener. Full of old school sounding charm and deadly fury, the band rages away at a mostly blistering pace, with a load of aggression, and just the right amount of eerie melodies floating about underneath. “Oblivion Pilgrimage” incorporates a few slower tempos while still pushing ahead with scathing fury, again with a sense of longing and despair coming through with the melodic interplay, crafting something potently heavy while sitting in a more otherworldly vibe. Even the more bonecrunching and lumbering title track that finishes the album, where the band unleashes more doom and gloom, still finds the time to offer a few moments of viciousness to switch things up.

Congregation Pestilence is a nice step into brighter yet oozing territory for Drawn and Quartered. The bursts of speed and intensity, layered with some trippy and eerie melodies give the band plenty to work off of without the formula becoming too one-note. Thoroughly enjoyable death metal for those seeking something filthy yet memorable. 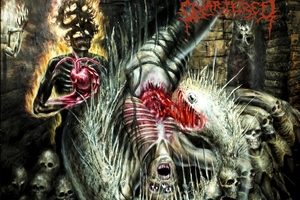