Draugur – By the Rays of His Golden Light (Naturmacht Productions) 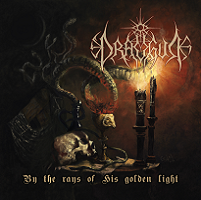 A Dutch outfit doing their best to channel the murky tones of the Norwegian black metal sound, Draugur are nothing if not stubborn in their approach as an orthodox BM band. The elements in their employ: corpsepaint-donning members, a Satanic lyrical approach, cross-wind riffing, and zero production values certainly make them a truism, although that can only get one so far. On their By the Rays of His Golden Light debut (talk about an odd title), Draugur are barely able to get their foot in the door for a quick, mean-faced hello.

The low-key and even more lo-fi production job doesn’t do Draugur any favors. While it would be of benefit to achieve some sort of tonal clarity in the guitar department (one of the guitar players’ name is Obscura, which means he’s either a big Gorguts fan, or really digs the German tech group of the same name), Draugur basically twists in the wind-swept wind across the album’s seven cuts. “Torment in a Maze” occasionally toys with sludge metal, of all things, while the flat-footed “I, Death, Descent” makes minimal inroads at evoking atmosphere and melody. Things only partially come together via “I Rule This Night,” which again, shows the Danes don’t deal much with the English language (no worries – it’s complicated), but here, they at least manage to find some balance between acidic riffing and tumultuous extreme metal.

It would be wrong to say By the Rays of His Golden Light is a clichéd album, although the naked eye (or ear) would suggest something different. Really, this is pretty bland and flat black metal, none of which does a good job at honing in on the style’s prime era, or better yet, even giving Draugur a shot at competing.