Tuesday, 5th May 2020 By Katarina McGinn 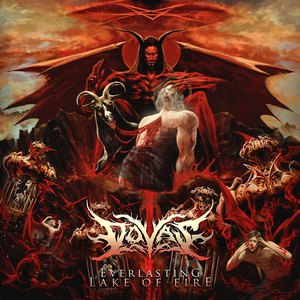 The solo project of Seven Spires drummer Chris Dovas, it’s quite easy to tell that Dovas is going to sound nothing like said act. A conceptual album about Satan’s triumph over God, the fiery artwork effectively gives you a good impression of what to expect. For the somehow uninitiated, this is going to be a furious death metal effort that is meant to pulverize.

Chris Dovas handles almost everything in the band sans the bass, which is tackled by Seven Spires’ Peter de Reyna, so it’s a golden opportunity for him to showcase more than just his drumming ability. Dovas wonderfully captures that pure death metal essence, as evidenced as “Satan’s Command” begins to blast away at high speeds. It’s tough to really place the ‘old school’ tag on this due to the solid production values, but one can hear the influences of the ‘90s scene (Florida and Sweden most notably) in the songwriting, and it’ll certainly appeal to fans of Deicide and Vital Remains (whom Dovas tours with). It’s frequently fast (as noted already), and the speedy guitar solos help to emphasis that adrenaline rush feeling that makes the genre so exciting. Some grooves enter the mix, such as on the title track, which bounces between these grooves and near-black metal buzzing riffs. The drumming is fantastic, and isn’t entirely reliant upon just firing off blastbeats, and provides some nice variety even at the more raging tempos. The vocals go for that upfront and evil vibe, and while they don’t break the mold, they hit the spot entirely with the frantic energy. Lastly, with that quintessential death metal tone, the production stands out in letting the bass breathe. Something that can tickle the ear and works with as a great standout for the band, along with the fireworks-laden guitar solos.

It’s easy to see Everlasting Lake of Fire as a labor of love as well as a fitting tribute to death metal. It has all of the visceral energy the genre requires, while diving into the nuance to make it easy to return to. Dovas has clearly put all of his passions into this release, and fans of extreme music should be easily impressed.