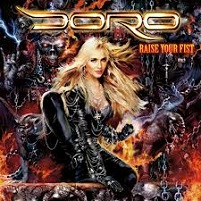 The alluring beauty of Doro Pesch once again adorns the cover of her 13th studio recording. This time she strikes a super heroic pose, raising her clenched fist as if to strike with the mystical powers of Marvel’s Doctor Strange. Some might find it amusing, but I rather see this as just another slice of rock’ n roll. In fact, most of Doro’s album covers are all encompassing fantastical representations of her hard rock image, and Raise Your Fist is no exception.

What you get with this release is 13 tracks, all tightly packed compositions and brimming with that hard rock swagger Doro is known to exhibit throughout her stellar career. She’s definitely a seasoned professional who knows how to command the heaviest of moments through the songs and can also pull back to reveal that soft side on occasion. With this release though, she definitely proves that variety is the spice of life, or all the rage, depending on your point of view. She’s able to kick out the jams on such numbers like “Rock Till Death” and “Take No Prisoner,” but suddenly switch gears and reveal that softer side by singing a duet with Motorhead’s Lemmy on“It Still Hurts.”

Doro also decides to sing two tracks in her native tongue, and even if you cannot decipher the German words it still rocks hard. “Engel” and “Freiheit” are the two songs in question, and they don’t seem out of place at all. She is also the type of performer whose voice grows more soulful with age, so the crowning moment of this release comes in the form of “Free My Heart,” which proves she can sing a ballad with the best of them. I found it heartfelt and modestly paced for the most part and as I mentioned it goes a long way to show off the singer’s diversity.

The album runs a whopping 52 minutes in length and although not as heavy asFear No Evil (her previous release), it still manages to capture my attention. I prefer the variety being showcased on this release, and she even manages to close out the album with strong efforts in the form of “Victory” and “Hero.” There’s truly not a bad song in the bunch here, so I feel this may be Doro’s strongest effort yet. At least she manages to create a well balanced studio recording and that has to count for something too.

Raise Your Fist is a solid outing for Doro Pesch and at this stage in the game I would expect nothing less from her. She still manages to savor that hard rock image and make it work for her and I hope she never stops doing this. I say raise your fist in the air babe, and never let it go.