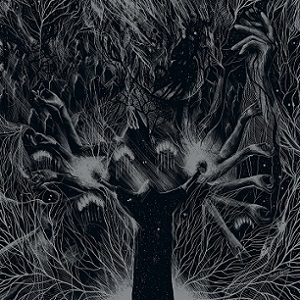 The type of line-straddling, eclectic black metal Norway’s Dødsengel plays is akin to dangling a carrot in front of a horse – it’s worth pursuing, but can be a little unrewarding at times. For a band whose last long-player in 2012, Imperator, was a two-disc 150-minute foray into twisted black metal, Dødsengel appear to never be without ideas. Thus, it’s with little surprise on their new Interequinox, the enigmatic duo of Kark (vocals, guitars, bass) and Malach Adonai (drums) present an unyielding grab bag of esoteric black metal.

There’s a definite line between outwardly weird black metal and the type Dødsengel plays, which is falls somewhere between the space-rattling work of Oranssi Pazuzu and the oftentimes obtuse angles and shades of Funeral Mist. While the sum of those two bands certainly doesn’t equal what Dødsengel are doing, it enables their songs to head down a turbulent path, whether on “Prince of Ashes” and the dungeon-y “Opaque.” “Illusions” may get the nod as the album’s most sideways track, introducing an avant-garde flank that quickly merges into crashing, mid-tempo black metal that traverses head-long into the abyss.

In reality, Interequinox never gets settled because Dødsengel never allows themselves to become too enamored with an idea. For instance, a cut like “Ved Alltings Ende” initially has the makings of a doom-ensconced puncher, only to suddenly morph into a hybrid of hyper, avant-garde black metal, all with a dizzying array of buzzing riffs and schizo vocals. It’s this sort of template, or lack thereof, that keeps Dødsengel’s songs fresh and vivacious, for lack of a better term. It also makes Interequinox a quandary of a listen.