Distorted – Voices From Within (Candlelight Records) 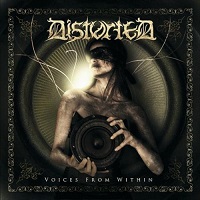 Oddly reminiscent of Amaran, a now-defunct melodic death metal band with clean female vox, Israel’s Distorted are a cool mix of the aforementioned sound and haunting Goth metal. Distorted is a bit more progressive and sharp than any regular female-fronted Goth band would care to be, but there are some rather charming hooks floated about on this 11-song sophomore effort.

Vocalist Miri has a nondescript whistle; never straying too far from her comfort pitch zone. She does weave some nice melodies on the excellent “Fading” and “Consistent Duality.” At times, her approach becomes redundant, but is cancelled out by Raffeal’s marauding growled vocals.

Musically, there is some very tasteful stuff going on, especially during the solo section of “Consistent Duality” where Mr. Raffeal busts out a flurry of flashy solos and melodies. “Escaping the Mind-Grid,” odd title and all is a solid balls-and-chunk number, while the more hard-nosed “What Remains” and reserved “Reveal My Path” demonstrate Distorted’s versatility.

Voices From Within certainly won’t break any new ground, but Distorted’s formula is can’t-miss. When done right, female-fronted metal can be more than the usual fare of symphonic pomp and Gothic morose and Distorted finds themselves hovering around both areas. Good stuff – let’s hear more down the road.