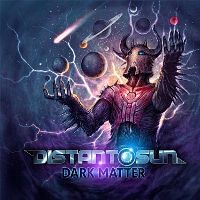 Upon first listen, I wasn’t sure what to make of Dark Matter, the debut full-length album by Distant Sun, a power/thrash trio hailing from Moscow, Russia and relative newcomers on the scene. I heard so many different sounds and influences throughout the 10-song effort; it’s almost as if each song has its own identity, sounding more like a compilation of various artists rather than a studio album from one band. From Orphaned Land and Dew-Scented, to Blind Guardian and Running Wild, there’s no shortage of references to choose from. Often times when you have this much disparity, it can be a knock on the band and take away from the record because things are going in too many directions and it lacks focus, however I don’t find this to be the case with Distant Sun. While the band may be young, having formed in 2010 and only released the five song EP Sunless Citadel prior to Dark Matter, the level of songwriting and musicianship on display here is tight, focused, intense and energetic, making it all the more impressive.

One of the aspects that helps tie everything together is the vocal delivery of Alexey Markov, who also shares guitar duties with Artem Molodtsov. Alexey possess a strong melodic register much more in line with power metal rather than the growled roars common with modern thrash, and though he usually chooses cleans over grows, his delivery is still full of grit and aggression. Alexey and Artem not only pummel you with punishing riffs, but also dazzle with their lead and solo work. The intro melody to opener “Prophet of the Mean” has a Middle Eastern flavor to it (Orphaned Land), before delving into a hammering thrash riff that is sure to rile up the pits in a live setting. “Kill the Fremen” picks up the pace with an even faster riff and lead work that has fingers flying all over the fret board in a fiery frenzy reminiscent of early Megadeth when Mustaine was full of piss and vinegar, while “Godsdoom” exhibits rolling rhythms that call to mind the galloping pirate anthems of “Rock n’ Rolf” and Running Wild.

Distant Sun does not go full throttle at all times, choosing to vary up the tempos to make for a more diversified album. “Dark Matter” starts off more like a ballad, with a melodic bass intro from Artem, who handles bass and guitars, and clean singing from Alexey. However, the real surprise of the album is “Gifts of Journey,” an acoustic folk gem that would fit comfortably between “The Bard’s Song” and “A Past and Future Secret.”

Distant Sun’s ability to draw from an eclectic palette of sounds and influences and weave them into its musical compositions without losing its identity, or the listener, proves the band possesses songwriting acumen mature beyond its years. If Distant Sun continues to release albums on a par with Dark Matter, future success won’t be so distant.