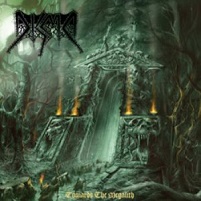 Not a bad year for classic death metal, eh? In a year in which Autopsy and Exhumed have stormed back, it’s only fitting that one of the scene’s originators (Craig Pillard, he of Incantation fame) puts out a crude, ugly death metal effort in the form of Disma’s Towards the Megalith. Latching onto the doom/death brand that was so killer on Incan’s Onward to Golgotha, Towards the Megalith benefits from the combined knowledge of Disma’s core (lots of scene vets here) for a predictable, but largely effective 8-song effort.

A quick glance at the song titles (ex. “Vault of Membros,” “Lost in the Burial Fog,” etc.) makes one pine for nostalgia, to a time when death metal wasn’t about a flurry of fingers or wasn’t embellished with keyboards and other various bells and whistles. So at the core, this is what Disma’s modus operandi is; to in turn recapture DM and take it back from the new breed of bands who wouldn’t know a good Obituary riff if it hit them in the gut.

Hard not to be sucked in by the gradual crawl of the aforementioned “Vault of Membros,” for its grinding main riff is a towering behemoth. When the band decides to move out of first gear, like on opener “Chaos Appartion” and “Chasm of Ocenus,” those slower moments are made all the more heavy. And when Pillard’s vocals (which sound like they’ve been resting in some type of cryptic tomb for the last decade) get in concert with the near-dirge like quality of these compositions, it’s like 1991 all over again. Minus the high-tops, of course.

The fraction of people who still burn for albums like Toward the Megalith are going to quickly find that Disma are the real-deal. Not because of the band’s pedigree; not because of the killer album artwork and song titles; but because death metal without pretense and bombast has an enduring quality to it. Best we recognize.