Disincarnation – By the Old Gods and the New (Self-Released) 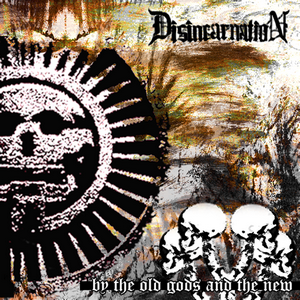 By 2017, most metal scribes undoubtedly grab their pitchforks when yet another band identifies themselves as old school death metal. Perhaps that’s part of the motivation behind Disincarnation’s self-description on Facebook as “doomy, grindy, death metal madness.” At least it’s a more enticing and fun way of saying it rather than just doing what everyone else continues to do.

By the same notion of more colorfully describing themselves, the music of By the Old Gods and the New also gives them more character to start with. As their first output, you could easily start playing the “sounds like” game, but that’s more or less expected at this point in the venture. What’s more important is that they never directly take from one source, but rather borrow a number of different influences to gel things into their take. It’s still old school death metal at its most boiled-back and dissected, but as the opening descriptor implies, they make some fine use of explosive grind (“Doomed by Legions of Hell”) and eerie, crusty doom (“Slime Lord”). More direct death metal muscle is used for the most part, but it’s not with some well-placed melodies to keep it above water (“Prayer for Total Death”). It all combines into a vintage death metal release that is pretty digestible and entertaining from start to finish.

No doubt a promising first dip into the water for Disincarnation. As they continue to flesh out what works for them, there’s a lot of inherent promise to what they could accomplish. The basic mechanics of the genre are already in place, particularly the grasp of melodic balance within the heaviness, so consider Disincarnation a band to keep your eyes and ears focused on. Especially for the death metal purists.