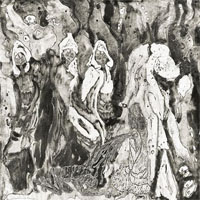 Ever have that feeling with a band that you really want to like it but there’s just that one blemish holding it back? Enter Canada’s Dire Omen, signed to the ever-consistent extreme metal label Dark Descent Records. The big strike against the band here is sadly a quick (or not so quick depending on budget) fix: production.

Wrestling the Revelation of Futility has a ton of potential. The band’s usage of atmosphere amid their death metal frenzy is worthy of note. The blending of early nineties death/doom styles with some black metal influence doesn’t sound like they are simply recycling the same wheel everyone else seems to be using. There are even some subtle melodies to enjoy in a number of the tracks as well. The frustrating part is the amount of focus it takes for these elements to be audible, which is in part due to the horrid production. Sure, it’s a death metal record, and it’s even okay to throw back your production to earlier times if the sound calls for it, but there are some inexcusable faults here. The vocals are barely noticeable, heavily drowned in the mix. Some bands can make this work, but not here. Next is the very tinny and thin drum sound. It carries no weight behind it, but then again, everything sounds a bit thin so nothing really carries the proper heaviness an album like this needs. It really sounds like the production an early ‘90s black metal band would aspire to in order to sound “true” and “kvlt,” with one of those Fisher-Price recorders. To top things all off, a number of the tracks bleed together and there is a terrible edit that noticeably “cuts” between the tracks.

Alas, Dire Omen does have the potential to be huge. If they could get a better recording, perhaps the rest of the world could realize it as well. Sadly, the production here really renders it almost to the point of being unlistenable. What a shame…