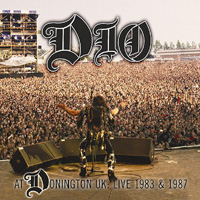 Golden times these were for Dio, especially in ’83, just when Holy Diver hit and exploded. As the title suggests, At Donington UK: Live 1983 & 1987 captures the Man (and his top-notch band) at their peak in the 80s, with two different live sets recorded at the legendary Donington festival in the United Kingdom. With his voice fiery and song selection nearly flawless (no “Caught In the Middle,” but that’s OK), this double-disc set is a perfect snapshot of just how powerful Dio was in his heyday.

Disc one captures the band in 1983 in support of the aforementioned Holy Diver. With then-young guitar protégé Vivian Campbell in tow, Dio was an instant smash. The capacity crowd (just have a gander at the photos in the booklet…wow!) was well in-tune with lead song “Stand Up and Shout” and single “Rainbow In the Dark.” Sabbath gets a go-round on “Children of the Sea” (it’s downright beautiful) and “Heaven and Hell,” while “Stargazer” and “Man On the Silver Mountain” gets the nod from Dio’s Rainbow days. Campbell is clearly the best guitarist Dio ever had, and while he’s a tad sloppy, he plays with a tenacity that has yet to be matched. And to think, his immense skills are wasting away in Def Leppard.

The second disc is taken from the Dream Evil era, when Craig Goldy entered the fray. A much more clean player than Campbell, Goldy entered when Dio’s popularity was starting to wane, although “Rock and Roll Children” (from 1986’s Sacred Heart) and “All the Fools Sailed Away” proved to be some of the better post-The Last In Line songs. Included on this set is Sabbath’s “Neon Nights,” Rainbow’s “Long Live Rock ‘n’ Roll,” and “Man On the Silver Mountain,” but disc one is clearly better.

Interesting timing on this one, with Heaven & Hell’s Neon Nights: Live In Europe also hitting the racks, but this is a far superior live set. At this point in time (more specifically, 1983), Dio was untouchable, and while his remaining catalog beyond Holy Diver and The Last In Line is considerably less mandatory, there is no denying how timeless these songs are. Long live rock and roll.