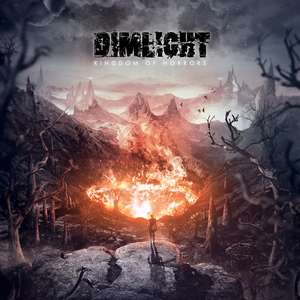 There’s bands that are ambitious in this day and age of ingenuity and marketing, and then there are bands that are Dimlight-level ambitious. For the band’s fourth album, not only did they release Kingdom of Horrors but two accompanying pieces – a post-rock instrumental album called Realm of Tragedy and an orchestral/symphonic version of Kingdom of Horrors called A Symphony of Horrors. Not enough? The album is based upon a novella written by the band (Bowels of Madness) which further spells out the album’s concept, along with a tabletop RPG game (Secrets of Irkala Kar) for the most die-hard of fans.

Of course, all of this hubbub is impressive but if the music itself is awful, then what is the point? Thankfully, the level of ambition they brought to developing the world around this album is also what drives all of the material therein. It’s symphonic death metal with a bit of gothic flavor injected in, which you have probably heard before, but there’s something to the level of polish Dimlight have brought in. As imagined, the conceptual album flows well (and the lyrical content is leagues above what many bands strive for) and does feel like you are being dropped into this fantastical world. A genuine cinematic feel sits within the tracks, and the combination of Mora’s powerful siren and Invoker’s growls couple with some dynamic changes from brooding to menacing to beautiful. And thankfully, the epic sound doesn’t mean an epic length for once, with the band cutting right to the chase with digestible 4-5 minute tracks and a runtime of 45-minutes. Again, this speaks to the level of polish as there’s no lulls in the album. The variation is there, but they don’t focus on overdoing it. Bombastic and symphonic cuts develop atmosphere without damaging the heaviness either, like on “Serpent’s Pact,” where the (melodic) death metal loses no punch even when moving into Mora’s epic moments.

One could imagine the band pitching Kingdom of Horrors to a studio to attempt a six-pronged attack, but as an album on its own merit, it sits in esteemed regard. Their ability to take the storytelling elements and bring them into a symphonic death metal album that anyone can enjoy (ignoring the conceptual pieces) that is to the point and still powerful is what makes it all work. While the band has had some revolving member problems (particularly on the female vocal side of things), it seems they have really hit their stride here.