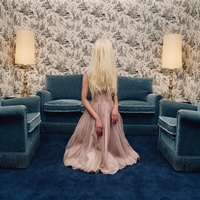 As previously noted in the Veilburner review earlier this month, Dimesland are among the emergent in a new crop of “weird” death metal. Though with Psychogenic Atrophy, don’t fret if you aren’t a death metal fanatic as the vocals are sparse and not of the gurgle/growl variety. This one has some major appeal for all the forward-thinkers among us.

The cover art here does a killer job of representing the album. Taking the ordinary and somehow contorting it into the creepy and weird. Dimesland does an impressive job of taking elements of the progressive (Atheist, Spiral Architect, Voivod) and merging it with the atmospheric/technical death metal palette (Gorguts, Pestilence, Pyrrhon) is the name of the game here, and there’s plenty to take in. From razor sharp riffing that can stop on a dime (no pun intended) and veer in a different course (“Are They Cannibals?”), to the moody and dissonant (“Xenolith”), to spastic explosions of violence (“Dying Foretold”), Dimesland has you covered. There’s an overwhelmingly haunting and disturbing feel to the songs because of their unpredictable nature (see “Malfunctioning Gears”) and keeps things moving even with the longer cuts. It’s an adventurous album that you can get a large number of spins from while you try to dissect all of the goings-on, yet never feels too crowded or overly dense where it’s not initially inviting to newcomers.

As previously mentioned, there are relatively sparse vocals in a number of the tracks. While it does help to maintain the off-beat atmosphere Dimesland has setup, it just seems so effective when they utilize vocals in a more regular manner. It’s a minor gripe really, but this is a band with some huge potential as they continue to grow. As it stands, Psychogenic Atrophy is a welcome addition to the more off-the-beaten-path albums that seem to be gaining in forward momentum as we close out 2014.