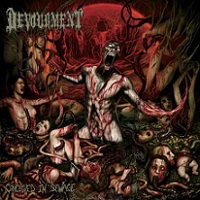 One of the bands that pops up only when discussion for the usual brutal death metal suspects has waned, Dallas’s Devourment are back on the ‘ole killing trail with Conceived in Sewage, their fourth album in an otherwise unproductive and overrated career. While some want to give these dudes props for ushering in the era of “slam death metal” (something that Dying Fetus does much better), Devourment really don’t have much of a go-to move. Conceived in Sewage pretty much wallows in its pre-designated pit of putridness.

A natural, raw Erik Rutan (Hate Eternal, Cannibal Corpse) production job lends to the guttural tone of the album, allowing such ho-hum numbers like “Fifty Ton War Machine,” “Fucked with Rats” and “Today We Die, Tomorrow We Kill” to have some visceral 90’s punch to them. Of course, that’s the biggest problem with the album – it’s a carbon copy of what came from the mid-90’s, where upon bands virtually cannibalized themselves to no end. And yes, that was 100% an intended pun.

For an album that tries to push itself off as polarizing and divisive, Conceived in Sewage is anything but. The dimensions are limited, the songs are essentially traced-over from the earmarks of Broken Hope and Suffocation, too. Yeah, another day in the brutal death metal office of mediocrity. 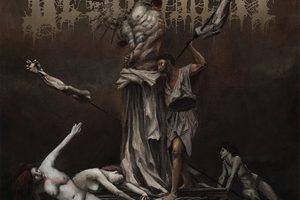