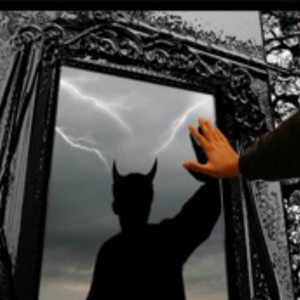 Although a relatively new band since forming in the summer of 2017, guitarist/vocalist Corey Tourigny and drummer Troy Hanks have played previously together in the 1990’s with the Massachusetts melodic metal band Mystic Fury. This time around though in Devil’s Mirror, the duo channel a mix of gothic and doom influences on their debut four-song EP – speaking to a deep affinity for artists like Type O Negative and Black Sabbath while putting their own spin on things.

Corey’s guitar tone conveys that melancholy and despair necessary to penetrate the recesses of your mind – layering background vocals and his natural low register with an extra element of soul while Troy Hanks keeps the tempos locked and loaded into this slow steadiness of sorrow. The uncanny resemblance to the much-missed Pete Steele comes through immediately on “The Cave” – the extra raspy hold outs adding that sinister, left field nuance to shatter the sky while the whispering/narrative second half adds to the building gloomy atmosphere. On the rare occasion where the band decides to go a little bit more upbeat and swinging, the verses of “Sour Voice of Reason” allow the band to expand into different shades of gothic and doom, giving this track a hypnotic groove foundation. The commercial hooks/elements pop in now and again – without sacrificing the natural metal platform present, as “Don’t Lie to Me” has that potent riff/melody connection that would easily have broken big on modern hard rock formats during the mid to late-1990’s. Keeping the production values raw adds to the in your face element that these four songs convey – it’s as if you are hearing the duo cranking up in front of you as they rehearse, limiting the bells and whistles to the layers of vocals when necessary for supplementation, or the occasional keyboard enhancement.

Considering the bi-coastal work as these two musicians live on the West Coast and East Coast, we’ll have to be satisfied with Devil’s Mirror being more of a studio entity than a going live concern. But for those who miss a great mix of Ozzy-led Black Sabbath and the prime-time Type O Negative years, this will bring tears of joy and slow hair windmill headbanging in abundance.