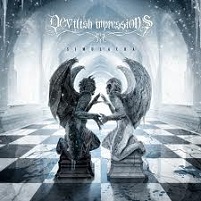 “Alucard” is “Dracula” spelled backwards. Blistering knows this thanks the legendary 8-bit Nintendo game Castlevania 3: Dracula’s Curse, of which a character by the name of Alucard appears to help Trevor Belmont in his quest to defeat Dracula. Therefore, “Alucard vocals” should be a new term us lazy metal journalists use to describe ill-fitting gothic vocals in the confines of black metal. That, or “Count Chocula vocals,” although tagging one of the world’s best cereals next to subpar black metal just doesn’t feel right…

Simulacra is the third release from Poland’s Devilish Impressions, who have made the jump to the usually-reliable Lifeforce Records. Their sound is suitably symphonic, with a steady stream of orchestral keyboards accompanying sub-Dimmu Borgir song constructs. For purely the sake of reference, they best resemble Italy’s Graveworm, although Graveworm was never careless enough to think that syrupy Goth vocals would complement their sound.

The bottom falls out almost instantly on album opener “Simulacra Icaros,” where upon Quazarre’s clean vocals make their first appearance. We’ve long fought against the tide of scream-o and/or EMO vocals, but Quazarre’s clean belch could rank as one of the more annoying and off-putting vocals in extreme metal. Subtract them from the occasion, and Devilish Impressions make some relatively decent headway on jams like “Legions of Chaos,” “The Scream of the Lambs,” and the all-instrumental “Solitude,” a trio of songs that present a bevy of keyboard flourishes, bountiful melodies, and sparse moments of BM extremity.

Black metal has proven to be anything but a strange bedfellow with most outside influences, but the wannabe-romantic side of Goth just doesn’t sit right. It spoils the entire broth on Simulacra, thus rendering Devilish Impressions one of those black metal bands who look mighty inferior in the face of the style’s elite bands…and some of its hipster acts. Talk about a death knell. 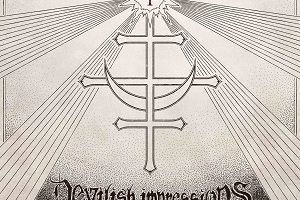