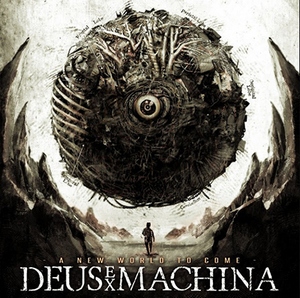 Always pleasing to find yet another fresh melodic death metal band that’s happy to keep the tradition alive. Especially when they operate within the confines of the style but aren’t afraid to keep up with the times. Deus Ex Machina is a Swiss-based act that is clearly rooted within melodeath but incorporate a welcome partner in modern, groovy riffing.

Deus Ex Machina, at their core, embrace the melodic death metal principles. Namely, there are plenty of catchy, fantastic riffs on A New World to Come and they tend to take centerstage. They stick to a more mid-tempo range, and it may take a few listens to fully appreciate. Sometimes the strongest facets of the band tend to sink in after you’ve become more familiar with the songs themselves. Some melodies within tracks like “Home” have an initial catchiness to them, but the atmosphere with the song tends to draw you in further (particularly in the chorus) as the initial vibes wear down. Some light electronic elements (don’t worry – nothing “bouncy” per say) and the focus on more groovy riffing tends to pull out the “modern” tag, but it’s a seamless blend. “Unfaithful Whispers” has some particularly strong grooves, while a more driving cut like “My Lament (Before the Disaster)” uses them to slow down and provide additional impact. Some exceptional solos can be found as well, such as in “Chrysalis,” and as already mentioned, the melodies within songs like “Dualism” have a much more veteran feel to them and harken back to the glory days of the genre. Lastly, Stephany’s vocals round things out with a caustic snarl for the most part, with growls being an effective bridge – keeping the music heavy, with little reliance upon clean vocals to convey the emotions.

Solid, modern melodic death metal is an apt description for A New World to Come. Deus Ex Machina come out from the gates with a real handle on how to balance melody and groove, which gives the album two pieces to latch onto. A promising start.