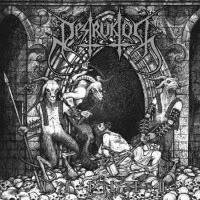 With members of Destroyer 666 and Abominator in the ranks (read: the few good extreme metal acts from Australia), Destruktor live up to their name on the brutal Nailed. The troupe gets their rocks off with vintage death metal of the unvaried nature, which was a bit of a given: Nailed was probably designed to feel more like a relentless beating than a trip down memory lane.

Wasting little time, the band is quick to dust off the raw, rugged angle of vintage death metal, along with some very minor black metal twists. Tempos vary from fast to faster, which is the primary cause for the whole “unvaried” thing, but one would be advised to stay the fuck out of the way when bruising “Violence Unseen,” album standout “Endless Reign of Terror” and momentous “Spawning the Immortal” come to town.

As telegraphed an album Nailed is (we could tell by the logo, the cover, the songtitles – you name it), it’s hard to argue with brutal death/black metal done right. There’s this growing contingent of bands simply concerned with being brutal – no gimmicks, no angle, just death metal played the way it was supposed to be played. Get used to hearing that over clichéd line when it comes to bands like Destruktor…