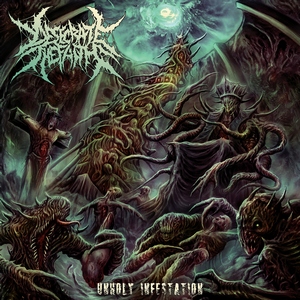 Brutal death metal 101. On their second album, Desecrate the Faith display all of the facets you’ve come to know and love/loathe about brutal death metal. Suffocation, Defeated Sanity, Disgorge, and their ilk all fit the mold, of which Unholy Infestation falls directly in line with. It’s heavy, it’s destructive, and it’s violent – in other words, what’s not to love?

Simplistic as it might be to say, this is one album that if you enjoy brutal death metal, it’s one that you’ll be happy to sink your teeth into. The riffing is rightly sinister in tone, with some sneaky attempts at darker melodies here and there (see “Malignant Divinity”) and the band varies up the tempos to make sure you get the faster and more technically-remarkable sections in there just as often as you get the groovy and rather headbangable mid-tempo chugging. In fact, the more visceral mid-tempo stuff is where Desecrate the Faith seems to shine, with an uncanny ability to come up with riffs that are just as brutal as they are memorable. It truly says something about the act when they go over the 50-minute mark for a runtime (a usual death metal taboo, at least for bands that want their material to stand out) and keep the material engaging from beginning to end. The usual ‘death metal deja-vu’ is minimally represented, which is the strongest compliment you can give the songwriting on an album like this.

It might be expected that you are getting more of the usual death metal song and dance, and to that end, you are. But the dynamics are so impeccably done that it’s hard to argue as Unholy Infestation rages through the speakers. Most importantly, it’s an album that will outlive the initial spins as you continue to dig further into those massive riffs.