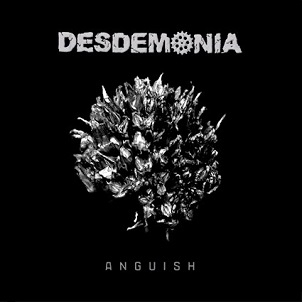 Active since 1994, Luxembourg’s Desdemonia has released three prior full-lengths on their own accord before signing with Danish label Mighty Music for the release of Anguish. Must be a persistence thing. To their credit, the four-piece had the always-dependable Fredrik Nordström mix and master the thing, which is fitting — Desdemonia plays a brand of near-melodic death metal that probably would have come across Nordström’s desk during his ’00s heyday.

Eschewing the in-and-out, basic songwriting formula concepts of their peers, Desdemonia weave a healthy brand of melancholy into their melo-death. It’s a rather welcoming happening on the title track and “Cross the Line,” essentially breaking the divide between straight-line death metal and melodic riffing that is more Amon Amarth than classic In Flames if you catch our drift. In turn, the band often puts their head down and pushes through the line, funneling barreling DM charges with touches of groove, which come to the fore on “Revenge” and “Deceiver,” the latter sort of relishing in mid-tempo-ville to the max.

Anguish ultimately works because of its partial deviation from the melodic death metal template that so many bands fall prey too. Like, you get the feeling these gents have an equal foot in the classic DM arena as much as they do the once-world beating Gothenburg sound, somehow, not sounding like either, but a snappy, cagey composite of the two. The best death metal band from Luxembourg? Probably.