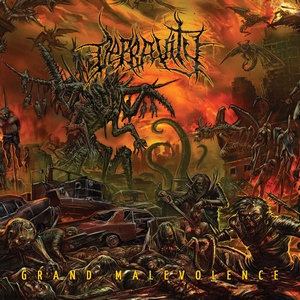 Australian brutal death metal band, Depravity, have created quite a buzz in the underground metal scene over the past few years. Signed to the well-respected, India-based record label Transcending Obscurity, Depravity are out to prove that their 2018 groundbreaking debut album, Evil Upheaval, was no fluke by releasing its ferocious sophomore effort, Grand Malevolence.

Armed with an arsenal of punishing technical riffs and pummeling rhythms, the band performs with skull-crushing brutality in the vein of Suffocation, Morbid Angel and Immolation, to name a few. Consisting of drummer Louis Rando, guitarist Lynton Cessford, vocalist Jamie Kay, bassist Ainsley Watkins and guitarist Jarrod Curly, Depravity take things to the next level with these 11 new tracks.

From Depravity’s technical death, brutal death and even progressive influences, the intense aural assault is consistent and constant throughout its 49-minute duration. Opener “Indulging Psychotic Thoughts” immediately bludgeons the listener with aggressive intensity, ferocious riffs and relentless pace from start to finish. There’s a lot of brutal stuff packed into its 4-minute frame. The title track features a memorable and catchy chorus, while the voracious “Cantankerous Butcher” strikes with a flurry of blazing riffs and furious double kick drumming, decorated with a relentless pace and a nice dynamic before more mid-paced blasting commences again. It’s not all relentless blasting, either; there are a few nice dynamic shifts and melodic elements on hand (“Cantankerous Butcher,” “Trophies of Inhumanity,” “Castrate the Perpetrators”) to add a different flavor to the proceedings. Album closer “Ghosts in the Void” closes out with an ominous sampled intro, majestic riffs and pummeling tom patterns, leading to a climactic ending to the record.

A minor gripe about the album would be on the production side of things. The overall sound of the instruments (minus the guitars) is slightly muffled and thin-ish, while the vocals are a bit distant in the mix, having to strain to hear the lyrics. In addition, the bass could have been boosted just a bit to give the rhythm section more heft. Besides a few complaints, Grand Malevolence is unbeatable. Plus, including the killer cover artwork by Alex Tartsus (Sepulchral Curse, De Profundis), Depravity has crafted one lethal package that will certainly catapult the band’s credibility to all corners of the world. 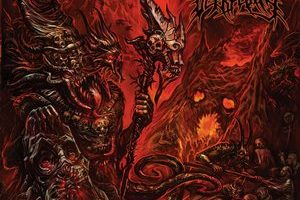